Skip to content
You are here
Home > Articles > Defences of Portsmouth and Portsea; demolition – and rediscovery 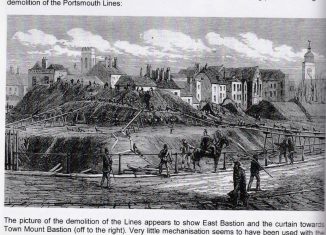 Although there were once two elaborately walled towns on Portsea Island: Portsmouth and Portsea, by the late nineteenth century most of the bastions, ravelins, walls, glacis and moats had disappeared as the towns expanded beyond these tight bands. So local historians were delighted when excavations In November 2018 briefly revealed the arrow-shaped low stone walls which were part of the defences of Portsmouth town built about 1667: Town Mount and the adjacent ravelin. The southern edge of Ravelin Park was being excavated before construction began on the university’s sports centre.

These defences were designed by Sir Bernard de Gomme, a Dutch military engineer, Charles II’s Surveyor General and Chief Engineer from 1661. In the 1660s in response to threats from France and Holland, De Gomme was commissioned by the king to remodel the defences of Portsmouth, Gosport, Hull, Sheerness and Harwich. He also designed the magnificent Plymouth Citadel, the fort at Tilbury and fortifications in Dunkirk, Italy and France. In 1669 Town Mount and a series of bastions were constructed, raised in height by excavation of a moat flushed by the tide 20 metres wide and 4m deep. These works obliterated the earlier fourteenth century earthern fortifications and Henry VIII’s ramparts. Col. Desmaretz remodelled Portsmouth’s defences again between 1745 and 1756. He constructed a redan and forward of it, a ravelin: an isolated island, with a narrow bridge to the Town Mount.

By 1865 the fortifications had been obsolete for many years. Portsmouth’s population was growing rapidly. The government’s Defence Committee recommended that all the Lines “except for those facing seaward and those overlooking the Common should be demolished.” The landward defences exposed in 2018 were once at least as high as the seaward stretch. In the end only the Harbour approach defences were retained – from King’s Bastion along to the Round Tower. The Spur Redoubt and landward structures where the moat bridge crosses to a tunnel which had been covered with concrete were excavated and bridged with timber from the great storm of 1987.

According to Les Capon of the archaeologists AOC Archaeology, earth excavated to make the moat and form the Town Mount was put back into it during the demolition of 1859. The 2018 excavations revealed the sloping layers of earth created in this process. It is likely the dismantling of the Portsea and Portsmouth fortifications took several years. The Illustrated London News for 6 February 1875 has an engraving showing the demolition of the East Bastion and the curtain wall towards the Town Mount Bastion. The workforce is shown filling in the moat by pick and shovel, supervised by a man on horseback. What remained of the stone fortifications had clearly been robbed for construction elsewhere. Recognisable reused tooled and shaped Portland stone blocks are visible in several places: in the wall to HMS Nelson in Anglesey Road, the lodge in Victoria Park and at Rivers Street Hall, a National School built in 1868 in Somerstown. At the university lecture we were assured that “This wealth of history will be incorporated into the building design”.