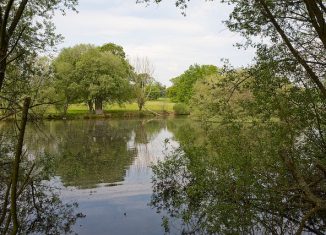 Deane and I have discovered some wonderful Hampshire houses which we would never otherwise have seen these last two summers, when the owners opened their gardens as part of the National Gardens Scheme. Last year one highlight was Cranbury Park, a splendid house on the crown of a hill. It was probably designed by George Dance in the 1790s for Lady Dance-Holland. Her husband was the painter brother of the architect. Cranbury Park was the home of several MPs. It was visited by Isaac Newton who designed a sundial in the gardens. In 1770 Thomas Lee Dummer MP purchased the Buttercross in Winchester, intending to re-erect it on his estate, but the people of the city prevented him from doing so. But he also owned Netley Abbey and moved the north transept to Cranbury Park as a folly. There’s a hidden lake, a camellia plantation and wonderful views to the north.

Lake House in the Candover valley just south of the Grange at Northington is an elegant glass walled pavilion with wide overhanging eaves reminiscent of Frank Lloyd Wright. It was designed by Francis Pullen and built from 1971-6. It is raised above the walled garden. We could see Lord Ashburton smiling benignly at us from his studio chair. We admired his long landscaped vistas and the rose pergola leading to a moon gate to the river. We followed the footpath north past the lakes to the Grange, where the lawns were full of opera buffs picnicking in the long intervals on the spreading green lawns. Kim Wilkie restored the landscape in 2017.

We have always wanted to see the medieval Court House at West Meon built in the 15th century by the bishops of Winchester as a rural residence for the Prior of St. Swithuns. Lovely herbaceous borders lead up to the garden front with its gothic arch in gleaming clunch and flint. We had a quick glimpse of the tall vaulted court chamber with its magnificent timber roof, which Deane had never seen before, despite his many years at the County Council Historic Buildings Bureau.

Weir House in New Alresford to the north west of the Lake is not included in the Buildings of England: Winchester and the North volume (2010), but it’s a substantial red brick house of the 1890s, beautifully sited between two strands of the river Alre. The main river frames a broad lawn lined with tapered yews, while another stream is diverted to run inside the walls of two wonderful walled gardens designed by George Hollingbury MP for East Hants. This September the veg. garden was bursting with produce, all planted in angular beds which form a dynamic pattern. The garden’s focus within its earth berms is on the moongate to the wilder land beyond. Within the brick and flint walls an elegant curved pavilion encloses the swimming pool and formal planting. A bog garden with raised walkways flanks the river, complete with swans preening themselves in the clear shallow water.