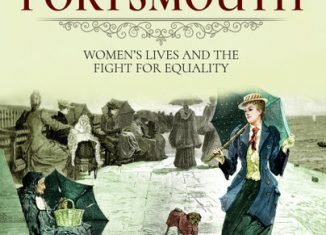 Following their popular series of paperbacks on towns in the Great War, Pen & Sword published a follow-on series entitled “Struggle and Suffrage”, with local historians and authors again being asked to write about the experience of a town or city of their choice. Sarah Quail has the distinction of writing both the ‘Great War’ and ‘Suffrage’ volumes for Portsmouth, and will talk to the Society about the much less well-known experiences of women in the early decades of the twentieth century. “The women of Portsmouth had of necessity to be tough. They kept their families together during long naval and military deployments overseas, raising their children on their own for much of this time. They worked in domestic service, in nearby stay factories or simply took in sewing to complete in their own homes, often with the help of their children.” Sarah has lived and worked in the Portsmouth area for many years. She spent most of her career in local government and has written and contributed to a number of books and articles on different aspects of Portsmouths history. She is a member of the Church Buildings Council, a school governor, and a member of the board of management of her local arts centre.
Royal Maritime Club, Queen Street, Portsmouth PO1 3HS
Share on Facebook Share
Share on TwitterTweet
Share on Pinterest Share
Share on LinkedIn Share
Share on Digg Share
Send email Mail
Print Print
Top